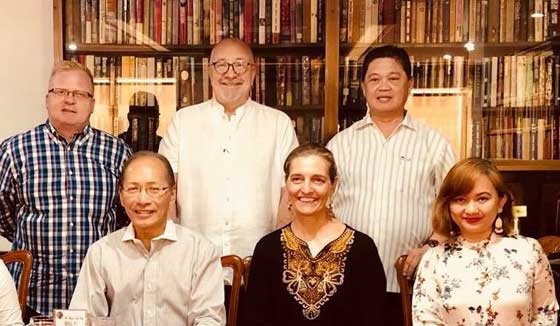 THE American Association of the Philippines (AAP), the oldest American organization in the Philippines, will celebrate the 71st George Washington Charity Ball event at The Rizal Ballroom of Makati Shangri-La, in Makati City, on Feb. 16.

The organization will also acknowledge leaders who are making a difference not just here in the Philippines but globally.

The ball will feature performers such as Arnel Pineda of the American band “The Journey.” Organizers are expecting 500 attendees with different leaders to grace the event with the usual attendance of the representatives from different embassies.

Last year, AAP had the first Filipina CEO, Sheila Lirio Marcelo, who made it at New York Stock Exchange came.

According to Loida Nicolas Lewis from her recent publication, “Sheila Lirio Marcelo is one of only 3 percent women CEOs in public traded companies. Five years ago, on January 24, 2014, the company Care.com she founded in 2006 was listed in the New York Stock Exchange with the ticker symbol CRCM. Care.com—headquartered in Waltham, Massachusetts—is the world’s largest online destination for finding and managing family care, serving more than 27 million people across 20 countries. As Care.com has grown and scaled, Sheila has been honored with numerous accolades, including being named one of the “Top 10 Women Entrepreneurs” by Fortune Magazine. In 2014, she was the youngest recipient of the Harvard Business School Alumni Achievement Award.”

According to Grace Bondad Nicolas, one of the Board of Trustees, “Acknowledging these Leaders is also our one way to inspire others. These global leaders set an example and continuing to do more in-spite of being successful which in return helping not just its organization, not just a nation but reaching others worldwide. We need to emulate their work ethics and will to help others.”

The Association was born in the Philippines in 1949. AAP is also the Owner-in-Trust of the American Historical Collection, approximately 60,000 volumes about the American colonial Period and Post-war events that used to be housed in the US Embassy.