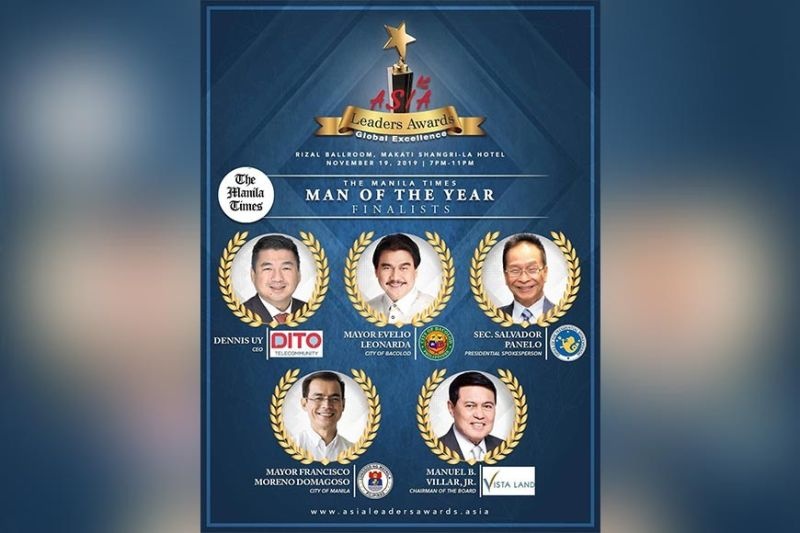 FOR the second year now, Bacolod City Mayor Evelio Leonardia is short-listed as a national finalist at the “Asia Leaders Awards 2019: Global Excellence” whose awarding ceremony will be held Tuesday, November 19 at the Makati Shangri-La Hotel in Manila.

This year, Leonardia was nominated for Man of the Year award, along with Manila City Mayor Francisco “Isko Moreno” Domagoso, former senator Manuel Villar, who is the chairman of the board of VistaLand; Presidential Spokesperson Salvador Panelo, and businessman Dennis Uy, chief executive officer of Dito Telecommunity.

The City of Bacolod was likewise chosen this year as a finalist in the Tourism Award of the Year - Festivals category; along with Solaire Resort & Casino for Recreation category; Resorts World Manila for Hospitality category; Palanca Travel & Tours for Agency category; and Lakbay Museo for Destination category.

Last year, Bacolod City was also a finalist in the Tourism Award of the Year.

Upon learning of his nomination, Leonardia said, “To be in the company of these people whom I admire and with whom I have the highest regard, is, for me, already an honor and a victory by itself.”

At present, Leonardia is the national president of the League of Cities of the Philippines (LCP), a formal organization of the mayors of the 145 cities in the country.

He has also recently been appointed by President Rodrigo Duterte to the Legislative Executive Development Advisory Council [LEDAC] as the lone representative of all local governments in the country in the council. The LEDAC is the highest advisory body to the President for economic and development.

As LCP national president, the Bacolod mayor represented the Philippines at the World Summit of Local and Regional Leaders, organized by the United Cities and Local Governments, held in Durban, South Africa on Nov. 11 - 15, where he spoke at the CEO Forum on Local Government Associations to share his insights on issues besetting Philippine cities.

Meanwhile, Engr. Grace Bondad-Nicolas, co-founder of TAG Media Group that organizes the Asia Leaders Awards, said, “The Asia Leaders Awards, a culmination of Asia Leaders Forum, recognizes and acknowledges leading men and women in various industries who have exhibited exemplary leadership and contributed in promoting the country as a premier business hub in Asia.”